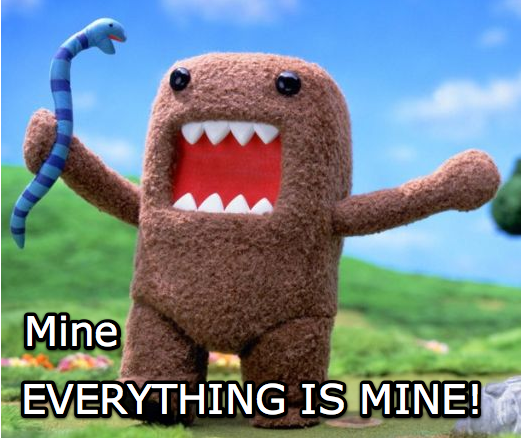 Basically, they are saying:

“What’s yours is mine and what’s mine is mine.”

Now it’s no secret TOS (Terms of Service) concerns didn’t start with Facebook. Facebook also isn’t the only site telling users: “Hey, we own your content.” My problem is with the licensing and sub-licensing and what they can do with content we put on their site. But the worst part is, Facebook makes sharing everything SO easy.

So why is this relevant to you? Picture this:

See the pattern?
If you think things don’t spread, you are wrong. Take the 25 Things, for example. People were complaining about how stupid it was, but fact remains, it spread. Even TIME Magazine wrote an article about it. No one can predict what will spread.

I am not trying to make you paranoid nor am I trying to start a TOS revolution. All I’m saying is remember the next time you upload or import something to share, Facebook WILL own it and you have given them the right to redistribute – and profit.

Further discussions on my Facebook here and on FriendFeed here and Mike has a great example of why we need to be aware in: “Facebook Lays an Egg“
Edit: Mark Zuckerberg’s response here. And usual, Duncan Riley of the Inquisitr says it best: “Word of advice: get your blog content off Facebook ASAP .