A while back, my friend Jeremiah Owyang wrote his perception of the state of social to which I contributed. Decided I’ll add onto my blog as well.

Twitter: dumpster fire but central to US current events, news
Facebook: where The Olds who ‘don’t get’ other social networks congregate to get attention, Asia’s LinkedIn, and others have an account for the sole purpose of Messenger (messenger.com via web)
Messenger: communication utility (Skype / Hangouts replacement; the Westerner’s WeChat and Weibo — encrypted messaging and P2P payments? Yes please!)
LinkedIn: depot of shameless self promoters and what NOT to do cues for teens and millennials professionally networking. I.E., Stay away from descriptors such as, but not limited, to: ‘futurist’, ‘keynote speaker’, ‘innovator’, ‘change agent’, etc., etc.,
Snapchat: dancing Hot Dog and awesome filters to cross post onto IG
IG: branding tool for the non-olds (teens). Lifestyle diary for Millennials (food, beauty, fashion, etc.)
Google+: Huh? What’s that???
Telegram: status symbol to show you’re ‘in the know’ about cryptocurrencies.
Slack: quickly becoming the new email
WhatsApp: where European Android users are
LINE: only relevant to Thais and old Japanese people
Ding Talk: where Chinese who don’t trust Weibo or WeChat conduct business

Social networks aside, my phone is the place I do the most internetting and boy has my homescreen changed a lot. Take a look:

The three apps on the bottom are apps most used: Twitter, brower, mail.
1. Apple’s mail app has been replaced by Outlook (yes, Microsoft Outlook) because Gmail loads the quickest plus the experience is much better. I can’t believe I’m saying this either but hey — it is what it is.
2. Safari has been replaced by Brave — which I wrote extensively about here.

Despite having 256gigs on my phone, I only have one page of apps. Mainly because I realized long ago I only use a handful on the daily. I also turn off the little red circles because they induce anxiety and helped me wean off my addiction. (Read about that journey here.)

…and the saddest part is how I’m really considering sending future people I date when the time comes to ‘talk about feelings’ to this post.

My goal this year is to be more human — must. knock. it. off!

…this was my stance after the Apple announcements of iPhone 6, 6+, and the watch but all jokes aside, there is good reason Apple is the most valuable brand on the planet and simply “mind-blowing“.

Personally, the Watch does nothing for me. I would never own one. The app screen (points below)

triggers my trypophobia (yes, trypophobia is real) and the design is just outdated — totally 80s.

However, what Apple did with the watch, as well as all the iPhones after the 4, is create a problem then solved the problem for us. First world problem-ing in the highest order. Or in scientific terms: they tap into the last triangle of Maslo’s Hierarchy of Needs, by making us need things we didn’t know we needed.

This deep understanding of human behavior and finding ways to hook people with design and hardware is something very few companies can achieve. Apple consistently creates problems then seamlessly and elegantly solves them for us — truly, one of the most innovative companies of our time.

Think about it: everything about technology is creating and solving more convenient ways of living. Telephones, email, computers, laptops, mobile phones, smartphones, tablets… and the next: wearables.

With the Apple Watch, Apple is now giving us 1) predicted text so we don’t have to type. 2) a way to transact without the extra effort of pulling out our phones. 3) a new type of push-pull notification system in a way that no other product or software does.

Which to me, is the most exciting part of the Apple announcement – all personal thoughts about style aside. It’s a bit peculiar to me how a lot more people aren’t excited about that vs the new and shiny hardware.

This morning, LINE had a major update.

Their new features are only part of the reason LINE differentiates themselves from the other messaging apps. They are truly, the leader in this space when it comes to long-term product and business strategies. Man, they are so smart.

The one thing that really blows my mind is how the iOS app is so much crappier compared to the Android app.

Hoping it was a bug, I switched the notifications to alert style and…

Check out the notification for the Android though:

I don’t understand the thinking behind the iOS notifications but that’s neither here nor there. This only goes to show the dominance of Android over iOS in Asia, and how more emphasis is placed on developing on the former than latter.

Living in Asia makes me really want to switch to Android.

I know I shouldn’t be surprised. I know I shouldn’t. And I get it, I really do. Feature phones (flip phones) back in the what? the 90’s in Japan had mind-blowing technology. I remember being in awe every time I visited Japan from the states. I couldn’t believe what flip phones could do. How beautiful the large screens were. How colorful everything seemed. Even ringtones, were better on Japanese phones.

Japan always felt like I time warped into the future.

Fast forward to 2007 when Apple introduced the iPhone and the  USA* adopted to smart phones. While Sony and NTT Docomo and Sharp and Panasonic and the rest of the Japanese portable electronic giants looked the other way, iPhones now have the largest market share in Japan.

But still. The rate of smart phone market penetration is just insane. I look at the numbers and can’t help but be awestruck by how behind Japan is…

And I look at most recent figures of people who purchased a smartphone from April to September of 2013. 82%. Of those, 68.5% of people switched from a feature phone (flip phone) to a smart phone. (chart via here)

I have no words…

But the good news is, because Japan is slower to adopt to smart phones than other developed nations, there is massive room for disruption. The Japanese are just now getting accustomed to visually appeasing, gesture friendly user experiences, so think of all the possibilities.

You know? I am so so so glad to be here right now.
This is one of the most exciting times to be in Japan.

*edited — Karl, you are correct indeed :)

Apple and Burberry collaborated and Burberry brought us inside images from Fashion Week using the iPhone 5S. If you or anyone you know are still on the fence about which phone to get, take a look at these images. 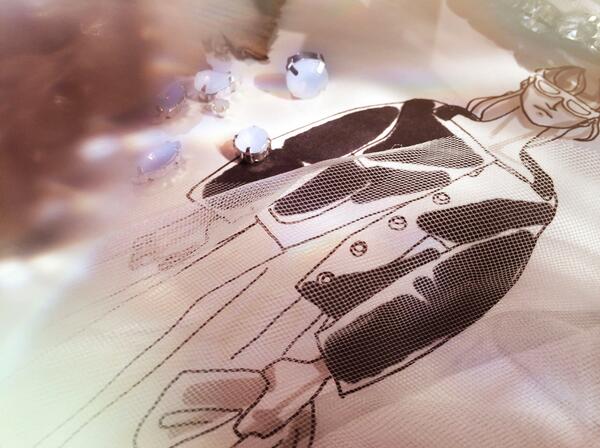 *for more technical outputs, these are two excellent sources: 1 and 2

On Sept. 10th, Apple announced the iPhone 5s and 5c (yay). I’ve been waiting since I arrived to Tokyo in June to sign-up for a Japanese mobile because of the iPhone.

Japan has three major carriers: NTT DoCoMo, KDDI / au and Softbank.
KDDI and Softbank have carried the iPhone and the only major carrier that was holding out was DoCoMo — which according to everyone I’ve asked around me, has the most superior network.

In the US, I think DoCoMo would be Verizon. KDDI is AT&T and Softbank is Tmobile or Sprint.
I found market share charts over on a Mobile in Japan blog (thanks, Paul) and took screen shots of the pie charts.

As it’s pointed out, a lot has changed and following this trajectory, DoCoMo had no choice but to carry the new iPhones or their market share would keep decreasing.

Whatever — that’s fine. I’m not really interested in Japanese mobile economics.
I mean, if you ask me, all three carriers have major sub numbers, considering the population in Japan.

What really annoys me, is that everything in Japan is backwards. For example, in the US, carriers give new subscribers incentives such as special pricing or handset discounts…makes new customers feel welcome. In Japan, mobile carriers reward returning subscribers.

In particular DoCoMo is a bit bizarre as they are only allowing returning VIP customers to reserve the 5c online. New customers or non-VIP customers are treated like second class citizens and I guess we have to wait in line or something. Fine, whatever. I’m planning to get the 5s which can’t be reserved so it doesn’t matter too much.

Then when they announced their pricing plan*, it made me not want to choose DoCoMo, even if apparently they have the most superior network.

That’s almost a $20 difference. WTF.
Oh well, I guess I’ll wait until the 20th to see which carrier offers the best price plan to decide which company to go with.

[EDIT] Update: the news article I got the pricing from, updated the post and apparently this is only student pricing. I feel a lot better now!