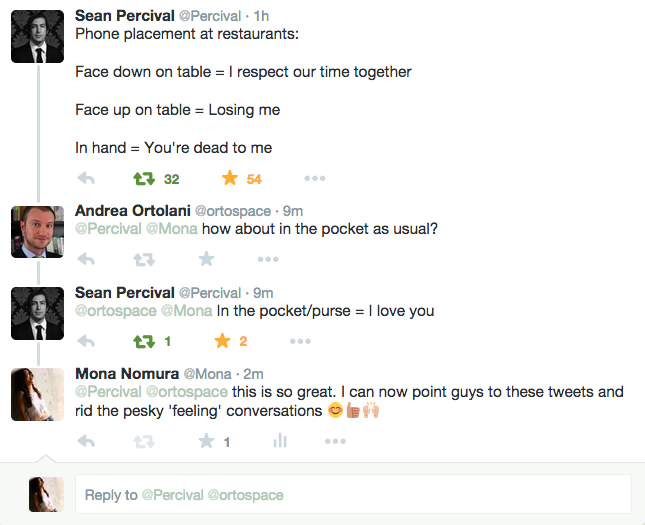 …and the saddest part is how I’m really considering sending future people I date when the time comes to ‘talk about feelings’ to this post.

My goal this year is to be more human — must. knock. it. off!

Russell Clayton, a doctoral student at the University of Missouri’s School of Journalism, who surveyed two hundred and five Facebook users about relationship conflicts related to Facebook. “Our study found that excessive Facebook users are more likely to connect or reconnect with other Facebook users, including previous partners, which may lead to emotional and physical cheating,” Clayton said, according toScienceDaily. He went on, “Facebook may be a threat to relationships that are not fully matured.”

via “How a relationship Dies” — The New Yorker

When trust and security  two of — if not the most — important factors in a lasting, healthy relationship, excessive Facbooking (basically creeping on people’s profiles and photos) can be detrimental. But we are so used to mindless stalking, it doesn’t really register.

I was in a long distance relationship for a while and I agree, it’s really difficult, near impossible not to be jealous when the underlying trust isn’t built yet. A lot of his activity would pour into my feed and his LIKEs of photos of random girls and flirty comments he would leave started bothering me.  The worst, was when I started questioning myself for being bothered by his actions. So I unfriended him.

That said, although I’m well beyond my teenage years, I use the Internet and social networks like one. I constantly have several apps open, have several group chats, one-on-one texting sessions going while browsing Twitter and Instagram so I’m probably biased to the above opinion of this one Russell Clayton. Plus, I have experienced it first-hand.

Ah, social networks — or more like, no more long distance relationships for me. Either way, I learned something about myself and in the end, that’s all that matters.

Pick one: love or money?

Seems like such a simple question with a no brainer answer. When I asked my Twitter and Facebook friends, I got a bunch of immediate responses. Of course, most said ‘love’.

After purposely waiting for some time, I then asked:

I’ve had someone choose money (well, a lifestlye) over me – and it sucks. I have and always been a person who places more weight on a person’s abilities to be honest to and with themselves. It’s near impossible for humans to always say what they mean or mean what they say. To me, it’s more about having the courage to be honest with yourselves and those you care about. Though lately, I’m starting to wonder if this is too much to ask of others.

But at the end of the day, I’m with Arrington all the way who expressed it best: 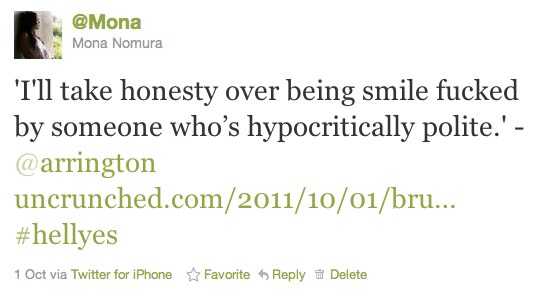 Dear self, permanently bookmark this post as a reminder you choose honesty. That you are honest to yourself and those around you. That there are others like you who can be honest to themselves and those they love. And most importantly, do not ever doubt yourself for having standards and expectations.

(ps: I know the math up there is wrong — silly little thing called details ;)) 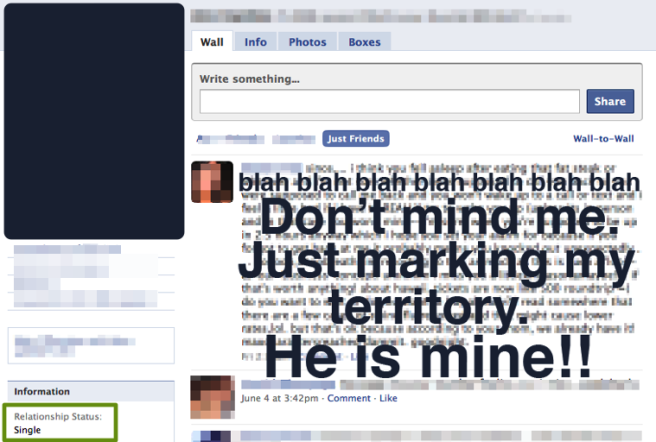 Remember hickeys? I do.

I’ve had two hickeys my whole entire life and both were pretty unpleasant experiences. The first, I was around 14ish (I think) and happy to finally be included in the hickey club. All the cool kids were in that club, so I felt cool too…until I realized how much effort was required to hide the damn thing. It hit me early on, that outside of school hickeys were just big, purple, markings faaaar from cool and well…simply gross. I stopped talking to the guy who gave it to me and made it clear to those who came after him, if they dared even attempted leaving a hickey, I’d drop kick them in the head.

The second, was in my early 20s.
I was going on an all girl Vegas trip and my bf at that time left the biggest, meanest, purplest, most disgusting hickey on my left neckline a day before the trip. I remember the shock of being so caught off guard. We were in our 20s. Who leaves hickeys? WHO? …and (really) blurted out of irritation: WTF am I? A frickin’ fire hydrant? Don’t mark your territory like an EFin dog! before kicking him to the curb. As much as I liked him, insecurity* = do. not. want, and  to this day, he still thinks I am a nut-job who broke up with him over a hickey (not confirmed).

So in my mind, hickeys are GROSS.

Nowadays, hickeys have stepped its game up and gone digital. It’s allllll about subtly marking territories on Facebook, Myspace, Twitter, et al., by leaving detailed wall posts spilling personal business for all to see, or uploading and tagging photos of the two of you. The various ways people leave digital bits is pretty hilarious and telling. All I know is, digital or not, hickeys = DO NOT WANT.

That said, dating is now a lot easier, thanks to social networking sites. Filtering potentials is so much easier. I can tell a lot about another person just by their Facebook or Myspace pages. If a guy I just met had digital hickeys all over their pages, I would definitely run the other way.

*Just in case he’s reading this, he wasn’t all that insecure. We were together during my peak partying years. I was working a 9-5, bartending for fun at clubs on the weekend, and partying when I wasn’t working or bartending… so I understand. But as wild as I came off, I never did anything to make anyone be insecure. 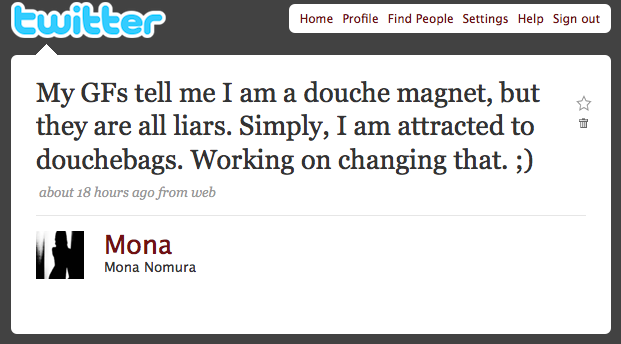 I have the absolute worst taste in men.

Lumping the men I dig into the “douchebag” category is a bit harsh, since they do not look like the common douchebags. i.e. greasy hair, designer clothes wearin, name dropping, flashy car driving, guido-ish, Myspacing…douchebags. The douchebags I am attracted to, are undercover douchebags.
END_OF_DOCUMENT_TOKEN_TO_BE_REPLACED 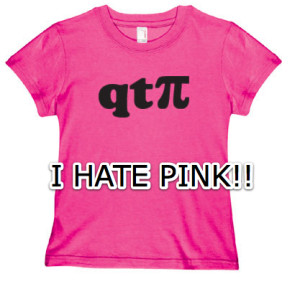 Being a geek girl rocks, but at the same time sucks. There are way too many assumptions and conversations take too long because I have to start by explaining and or proving myself. Otherwise, people are condescending.

“Aw, there’s something wrong with your PC? Is it plugged in?”

Please do not address me like a grandma on AOL. I’ve clean installed Windows, set up home networks and  servers. Wha chu kno ’bout that?

“How cute, you like the Palm Pre. Not sure if it comes in pink.”

Pink + mobile = Microsoft’s Pink – and that is not happening. Otherwise, does not compute. I happen to be a huge mobile junkie and interested in more than just its looks.

“You should install this browser called Firefox and rid IE, you know.”

Uh, I switched to Firefox in 2003. Been using WebKit’s nightly build for quite some time now, thank you very much.

…on and on, the rude comments continue.

Don’t get me wrong, I don’t mind AS much but people freak out when I can VPN, know how to get into terminal, troubleshoot CSS (if need be), use Google’s unofficial shell, know that cloud computing isn’t a computer thrown away by tossing into the sky, and hold my own in OpenSource, enterprise convos. I even have Dave Winer’s OPML editor installed and running a beta tool.

And yes, I am aware I wrote a paragraph justifying myself.

Anyway, as if that’s not enough to deal with, it sucks even more being a SINGLE geek girl. Why? Well:

END_OF_DOCUMENT_TOKEN_TO_BE_REPLACED

Ok. I lied. I didn’t run. Running away would’ve been horrible. My foot isn’t healed and the date would’ve caught up to me. Plus I may have been mistaken for a dine and ditcher – a bad date is not worth landing on Inside Edition. But most of all, it would’ve been bad manners.

However, I came up with five ways that’ll keep you occupied on a horrible date.

Get date to talk about themselves. Answer all questions with one word and throw the question back at him/her – this should keep your date occupied until the end of the night, which will give you freedom to:

And this should be enough to keep one busy through drinks and dinner. Tonight, I was reminded (once again) why I thoroughly screen – more on that later.